When Jill Came Tumbling After

June 04, 2013
The sun had not shown it's face for years.
She cried so much she had no tears.
In a place hidden beyond her fears,
She wept a thousand sighs.

In sorrow, she moped about the town.
Her face had only seen a frown,
Since the boy who broke his crown,
Would never more be nigh.

Hope was but a distant dream,
In times of fairy tales, it'd seem.
Laying by the simple stream,
They built after he died.

A mourning girl of no more fight,
Left alone and quite contrite,
Used to be her dad's delight,
Sweared that she had tried.

The accusations flew about.
Accidental, yet with doubt.
They could not keep it up without,
Proof of her foul play.

They tried their might to prove her guilt,
But as she stood among the silt,
She grasped at last the wooden hilt,
And knew no other way.

"I've done no wrong!" she proclaimed
"I do not know why you have blamed,
This tragedy that left me lame,
was none of it my fault!"

Then she raised the dagger high.
She knew that she could only die,
If only she'd have strength to try,
Collapsing with a halt.

Gathering round, the people gasped,
Surrounding near the girl collapsed.
A little girl stepped up and asked,
"What wrong has she done?"

"She lost her best friend on that day.
He slipped as crumbly ground gave way.
No wonder she has gone astray.
You have no place to judge!"

A silence came upon the crowd.
She looked up, eyes beneath her shroud,
All that this child had vowed,
Was definitely true.

The child lifted up her chin,
Gave the sad one her best grin.
She let out all she hid within,
Just as the sun shone through.

Still the thoughts, they lingered there.
A man then grabbed her by the hair,
And slit the throat of the blue eyed heir,
To her father's throne.

The King let out a painful cry,
Held her tight and asked God why,
How could he now say goodbye?
Letting out a sorrowful groan.

The guard beside then slain the man.
The crowd left speechless now began
To mourn with this King without a plan.
First Jack, now Jill had died.

The sun retreated yet once more,
Swore that it would shine no more,
Upon the land that harbored war,
Only havoc to abide.

I swear at times I see them there,
Upon the hill where no one dare,
Step foot in the foggy air,
That gathers at the base.

We still tell stories of the brave,
And of the fallen humble knave.
The stories last beyond their grave.
I'm sure you've heard this case.

Of Jack and Jill,
Gone up a hill,
to fetch a pail of water.
Jack fell down and broke his crown,
And Jill came tumbling after. 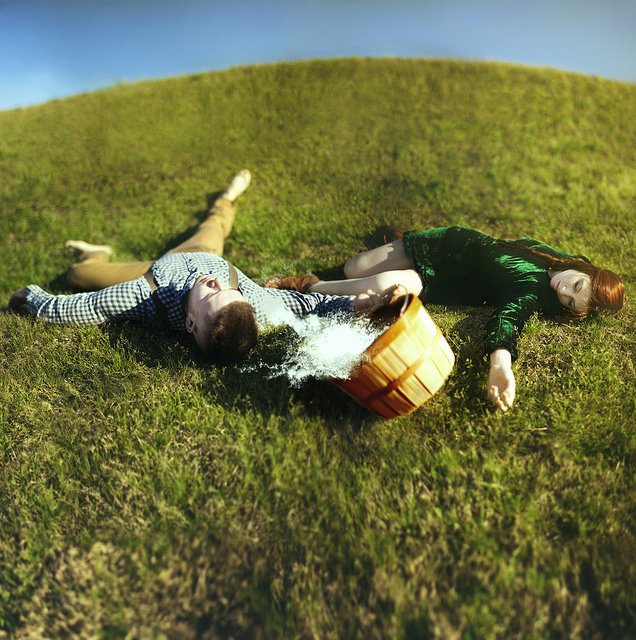 Popular posts from this blog

Be Careful Little Ears What You Hear

May 21, 2019
We turned on VidAngel to see what they had added this week and the movie Wine Country was on there. So I decided to check out the filters and as soon as I clicked on language, it turned into a silent film (the black bar is what is taken out)! 😳 250 things I didn’t want my ears to hear made this movie (even with filters) not worth it for us. 95 of those were use of blasphemy. 😔 I didn’t even get to any of the other filters and just decided to find something else. Sometimes we become numb to what we hear and see in movies and tv shows until it’s all there, in black and white bars. I’ve looked up movies I’ve watched before and was SHOCKED at what my ears heard (even if I didn’t realize the sheer volume of profanities). Psalm 119:37 says “Turn my eyes from looking at worthless things; and give me life in your ways.” Philippians 4:8 says “Finally, brothers, whatever is true, whatever is honorable, whatever is just, whatever is pure, whatever is lovely, whatever is commendable, if
Post a Comment
Go On »

July 31, 2015
Please note: This was a post I have struggled to publish. I have not used this blog too often to put too much personal information out there, but after studying about  unity and maturity in the body of Christ  through Ephesians, I knew I needed to be authentic. I hope you accept the following with open arms, knowing that I am bearing my very soul to you.Not many people know the struggle that I have faced, but I am beginning to realize that it's important to share in each other's burdens . SO here I bear my burdens, sharing with you in my heartache, that I might also encourage you, bearing your burdens as my own. Today is Mother's Day. Growing up, I never dreamed that this day could be associated with anything but happiness, joy, and thankfulness. When we experienced the miscarriage of our only baby on October 31st 2014, bracing myself for Mother's Day was something I didn't think to do. With the pain of my loss and everything on my plate with Christmas j
Post a Comment
Go On »

Be Sober & Be Vigilant

March 06, 2019
The past few (weeks now) have been an extreme journey through a very dark rabbit hole... one I never thought to peek into before now. Just the brazenness of satan to use Christ as a vehicle to promote his own agenda, makes me shudder in disbelief. It’s nothing new, but definitely bolder than ever before, leading unsuspecting souls into destruction. It just makes me so sick, sad, and angry. Angry at myself for allowing the enemy even a tiny foothold in my life, regardless of my obliviousness to it all. May God have mercy on those honestly manipulated by the enemy, even unbeknownst to them. There are many people, preachers, worship leaders, churches,etc. claiming the power of the Lord,  but are we paying attention to the Holy Spirit enough to discern the genuine from the frauds? The Bible warns us about these kinds of people and it's important that we listen and take heed!! "For false messiahs and false prophets will appear and preform great signs and wonders to deceive, if
Post a Comment
Go On »